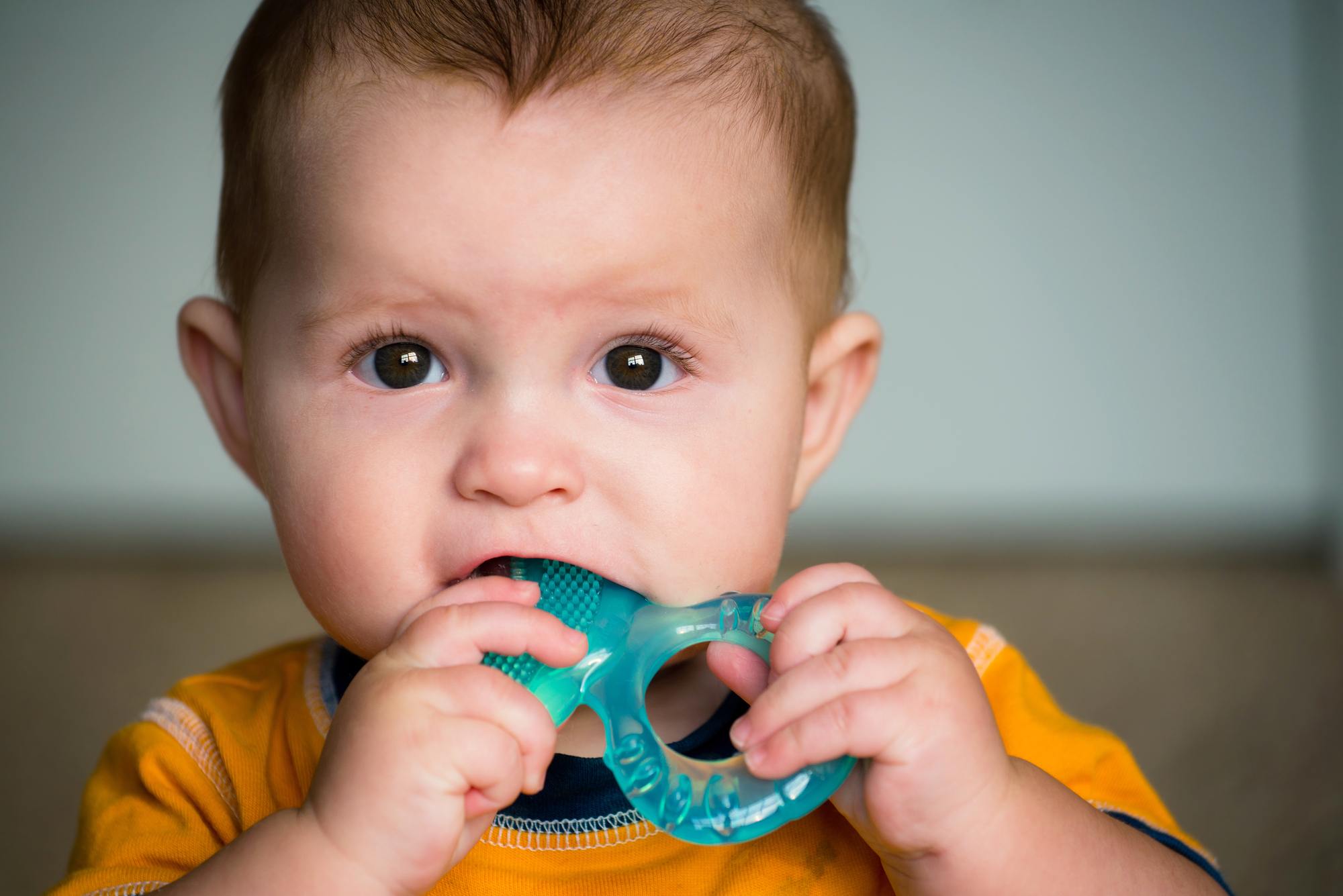 Teething Pains: Signs, Symptoms, and Solutions for Your Teething Infant

By Dr. Katie PetersonJanuary 26, 2022No Comments

Perhaps your baby is drooling quite a bit, or they’re a little more cranky than usual. Teething pain is normal for every baby and it’s a sign those first baby teeth are on their way!

It’s difficult to predict when your baby’s first teeth will appear. And there may or may not be a host of teething symptoms to inform you. In other words, you may be taken aback, or you may finally understand what those unusual symptoms were all about.

When do infants begin teething?

When it comes to when teething begins, there is a broad range of normal. That’s because the first time those first small pearly whites make an appearance varies greatly from infant to infant.

Teething symptoms can develop as early as two or three months before a baby’s first tooth appears, with most babies getting their first tooth at about 6 months of age.

However, some newborns’ first teeth appear as early as 3 or 4 months of age, while others do not appear until around or after their first year.

What are the most prevalent teething symptoms?

Teething is different for every infant. Some have hardly any symptoms, while others experience weeks of pain and irritability.

Knowing what teething signs to watch for might help you and your baby get through this stage. The following are some of the initial indicators of teething:

What is the best way to calm a teething baby?

You can alleviate some of your child’s teething symptoms by using the following remedies that have been tried and tested, and parent-proved.

There is also over-the-counter gels that can be rubbed on your baby’s gums that provide some numbing relief. Please check with your physician first, though.

Should we make a dentist appointment?

“Dr. Katie” is a graduate of DePauw University and the Indiana University School of Dentistry. She is a member of the American Dental Association, Indiana Dental Association, and an affiliate of the American Academy of Pediatric Dentistry. With more than a decade of experience, Dr. Katie became enchanted with pediatric patient population early in her career, and has focused on the care and treatment of young patients ever since. She has worked at the westside office since 2005, as an associate then lead dentist, before acquiring both the two practices. This has allowed her to sharpen her leadership skills and create a staff that shares her vision of “patient first.”

We use cookies on our website to give you the most relevant experience by remembering your preferences and repeat visits. By clicking “Accept”, you consent to the use of ALL the cookies.
Cookie settingsACCEPT
Manage consent

This website uses cookies to improve your experience while you navigate through the website. Out of these, the cookies that are categorized as necessary are stored on your browser as they are essential for the working of basic functionalities of the website. We also use third-party cookies that help us analyze and understand how you use this website. These cookies will be stored in your browser only with your consent. You also have the option to opt-out of these cookies. But opting out of some of these cookies may affect your browsing experience.
Necessary Always Enabled
Necessary cookies are absolutely essential for the website to function properly. These cookies ensure basic functionalities and security features of the website, anonymously.
Functional
Functional cookies help to perform certain functionalities like sharing the content of the website on social media platforms, collect feedbacks, and other third-party features.
Performance
Performance cookies are used to understand and analyze the key performance indexes of the website which helps in delivering a better user experience for the visitors.
Analytics
Analytical cookies are used to understand how visitors interact with the website. These cookies help provide information on metrics the number of visitors, bounce rate, traffic source, etc.
Advertisement
Advertisement cookies are used to provide visitors with relevant ads and marketing campaigns. These cookies track visitors across websites and collect information to provide customized ads.
Others
Other uncategorized cookies are those that are being analyzed and have not been classified into a category as yet.
SAVE & ACCEPT